Captain Edward Collins was born in the South West and into the infamous Johnson clan of Texas.  Ed often remarked about his desert upbringing as integral to his formative years.   With his brother John, Ed spoke fondly of his family, his father and especially his mother, Helen.   His love of the South West and Colorado, along with stories of his childhood, deeply inspired others and the uniqueness of his experiences challenged the listener – Captain Ed was no ordinary man;

He was the very archetype that Heinlein would call “The Competent Man”.  To boot, he was no small fella at a towering 6′ 7″. 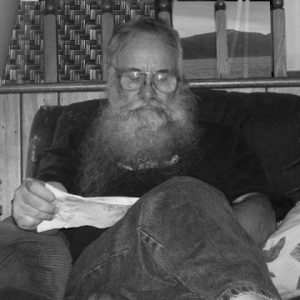 Considered by many to be a native savant, he is more known for role as an iconoclastic guru, sometimes biker-esque ass-kicker and later, the main figure head and legend behind the Appalachian Mountain Pirates.   To this day, members of the Collins clan make up the ranks of the Brother and Sisterhood of the Mountain Pirates.  Ed was no stranger to the water, while he did not pursue a career in the Navy like other family members, his love extended into the deep mountains and hidden rivers that made up the South West, Rockies and then later, his home in Appalachia.  He often took both of his sons and daughter out into the wilderness to show them marksmanship, navigation and pioneering – little did he know, this sense of ‘training’ would become the intellectual hull that many Pirates recognize today as our holistic plan to help our members recreate themselves as something far more than they have dreamed.

To his enemies, Ed was extremely hated, however deeply respected.  In this life, he was untouchable, yet, had a jovial sense of being that only a true joker of his kind has.  When married to his first wife, Scarlett – a stunning, yet troubled redheaded woman – she often made light of his pursuits into Yoga, meditation and diet.  In this fashion, she gave him the first nickname that stuck when she queried “What do you think you are? Some Kind of Guru?”  Funny, he figured, it kinda fit;

From that moment on, SKOG stuck and he used it throughout the rest of his life.

Having become disenchanted with the red leftist ideologies that often polluted the 60’s counter-culture he originally cherished – Ed went on to create an ‘iconoclassical’ movement that hardly shied away from serious spiritual pursuits, self defense and what would later become grassroots libertarianism.  Unlike his brother John, Ed was not cut out for government or military work – instead he chose the path of the scholar and businessman (paths he excelled at during the 1990’s).  With his second wife, he raised a small family through those years and then later with his third and final wife, began a banking business in the Carolinas – all the while broadening his understanding of spirituality.

In the early 2000’s, he met John J., who would later go on to become the defacto head of the Pirates after Ed’s leeward passing before December, 2012 – a date Ed was always curious about due to all the hype and nonsense.  Despite their age differences, the two became fast friends, and along with his own blood sons, they travelled to many destinations; mostly to see  music shows, attend philosophical debates  and comment on beautiful women.  Their adventures are now the fabric of internal legends that make up the rich tapestry of the Mountain Pirate sub-culture.

Ed never lived long enough to see all the cool stuff ‘his boys’ would do, by that time, they were all men – with the addition of ladies like Miss Jackie and Mama Mel.  One college professor was quick to point out, “Ed’s crew has a combined mean of intelligence that would rival any class at Harvard and enough military expertise to take over a small country.”  This was true, they were all brilliant folks; they just needed a little push at times – and that was what Ed would do – push.

Captain Ed. would be proud of the Pirates if he was alive today – from the shores of Cape Canaveral, to Appalachia and even Seattle – the Mountain Pirates not only made a name for themselves – they have grown.  From special operations groups, to craftsmen/engineers and even a few aerospace nerds – the Pirates make up the alternative ‘creme-de-la-creme” of America’s ‘sixth column’.  The Mountain Pirates are skilled beyond what is normally expected from any average person – with most speaking more than one language, almost all military veterans and who can equally survive a trip around the ‘Horn’, captain a board room and even survive on the slopes of Nepal.

And like their name suggests, all members can captain or skipper a boat both on the sea or through the mountains.  Mountain Piracy is far from a path for LARPers – one does or they do not.  The Pirates are the epitome of their home state’s motto;

The entire sum of the Mountain Pirate way is expressed in those three Latin words.

While the Pirates are no joke – however, seriousness is not allowed  – everything is tongue and cheek you see, because even with as much badassery as the Pirates bring to the table, they aren’t very ‘square’.

In 2010, Ed was given the title ‘Captain’ by a unanimous vote of all Pirates ‘on deck’.   He was called ‘The Captain’ until his death shortly before the Mayan ‘apocalypse’.

Ed left behind a set of ‘suggestions’ that the guys and girls should follow – which they did to a tee.

As per his recommendation, the six core members of the Mountain Pirates were all raised to Captain by a unanimous vote on June 3rd of 2017, in the heart of the Blue Ridge – a day marked to celebrate the greatest Pirate the Southern mountains has ever known;